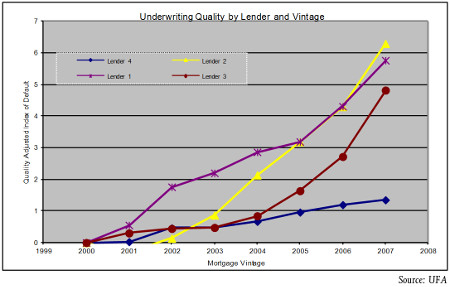 UFA Research: The Race to the Bottom?Underwriting and Contagion

Last quarter, we introduced the idea that misbehavior in one sector at a particular location can spread to other sectors. We provided some tantalizing evidence that political corruption might have spread to mortgage underwriting. This quarter we provide evidence on contagion within the mortgage sector. Lenders often tell stories about being pressured to lend more aggressively when competing lenders relax standards. With compensation often tied to volume of loans originated rather than profitability, it is easy to see why lenders might respond to the prospect of losing loan volume to competitors.

The graph provides some direct evidence of exactly this kind of contagion. The figure plots quality adjusted indices of underwriting quality by mortgage vintage for four mortgage lenders during the 2000-2007 time period leading up to the financial crisis and Great Recession. The indices are derived by first, quality adjusting the loans in each lender's portfolio, and then, tracking the quality adjusted performance for each lender by vintage . It is not surprising to see the curves rising steeply during this time period as lenders outdid each other in finding new ways to lend to ever more marginal borrowers. This is the era of aggressive "no doc" and infamous NINJA (no income, no job, no assets) loans. The rising lines are not a reflection of the wider spread use of these "innovative" instruments. Rather it reflects the fact that loans like "no-doc" loans became more risky over time.

UFA's findings are summarized in the graph. Lender 1 is the first lender to break away from the pack with questionable underwriting practices that were quickly reflected in the performance of their loans. The other lenders appear to have maintained some semblance of restraint until Lender 2 follows suit in 2004 and catches up to Lender 1 quickly by 2005. By 2007 Lender 2 is underwriting even worse loans than Lender 1. Lender 3 follows close behind in 2005 and is underwriting almost as poorly as Lenders 1 and 2 by 2007. Lagging well behind and never opening the flood gates is Lender 4. The graph reflects compelling evidence that poor underwriting is indeed contagious. That's a key finding of recent research by University Financial Associates of Ann Arbor, Michigan.

“Our research shows there is compelling evidence that poor underwriting is indeed contagious. The underlying data provides evidence of most private-label lenders' relaxed underwriting standards which spread through the industry during the 2000s,” said Dennis Capozza, who is Professor Emeritus of Finance with the Ross School of Business at the University of Michigan and a founding principal of UFA. “Data for other loan types like autos and mobile homes have similar contagion events before default crises. The challenge for regulators is to identify these contagion events and act to control them before a crisis develops."

The UFA Default Risk Index measures the risk of default on newly originated nonprime mortgages. UFA’s analysis is based on a ‘constant-quality’ loan, that is, a loan with the same borrower, loan and collateral characteristics. The index reflects only the changes in current and expected future economic conditions, which are less favorable currently than in prior years.

UFA’s pioneering mortgage analysis has successfully predicted problems in the mortgage market well in advance including the increased defaults in Southern California in the mid-90s and the recent national mortgage crisis. Its predictions are based on an extensive analysis of local economic conditions in each state and the relationship of those conditions to loan performance. The historical record of millions of mortgage loans is studied each quarter to assess the vulnerability of each state to loan losses and prepayments. The detailed analysis of each state – including best and worst places to lend – is available in the UFA Mortgage Report, published on a quarterly basis.