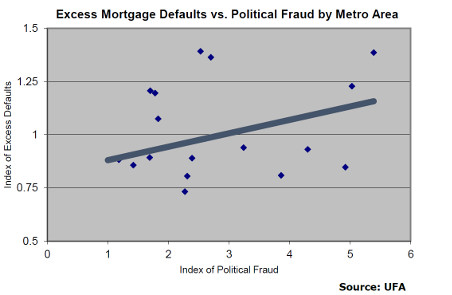 Poor underwriting practices spread through the mortgage industry in the 2000s. By 2007 default rates reached embarrassing levels after an orgy of misguided innovation and lax verification. The evidence is consistent with the interpretation that misconduct in mortgage underwriting spread sequentially within and between lenders. Are mortgage defaults also spatially correlated with other metrics for corruption? Researchers have compiled data on the prevalence of political corruption from court records and on business misconduct from SEC actions. A 2015 study by Parsons, Sulaeman and Titman ("The Geography of Financial Misconduct") finds that at the city level "financial misconduct is highly correlated with political corruption and with ethically questionable (but not illegal) behavior by local physicians."

The graph plots the index of excess defaults vs. the metric for political corruption. Our metric for excess defaults is the ratio of actual defaults in a metro area divided by the expected number of defaults conditional on the characteristics of the mortgages written in the metro area. The conditioning variables include loan terms, borrower credit, collateral characteristics and local economic environment. The metric for political corruption is the rate of U.S. Justice Department convictions of elected officials for each district in the metro area, as provided by Parsons, Sulaeman and Titman. The line in the graph is a trend line of best fit.

UFA's findings are summarized in the graph above. This preliminary evidence is suggestive that the social norms in one sector of a metro area may spill over into mortgage performance. That's a key finding of recent research by University Financial Associates of Ann Arbor, Michigan.

“We would not describe the relation between the two indices as 'highly correlated'; but there does appear to be some co-movement. This preliminary evidence is suggestive that the social norms in one sector of a metro area may spill over into mortgage performance. Miami, a city known for political corruption, does indeed have a high index of excess defaults. Chicago provides an exception to this pattern,” said Dennis Capozza, who is Professor Emeritus of Finance with the Ross School of Business at the University of Michigan and a founding principal of UFA. “In future research, UFA will be exploring these issues further. In particular, the pattern of spatial excess defaults may be helpful for understanding not only social contagion, but also other overlooked aspects of mortgage performance."

The UFA Default Risk Index measures the risk of default on newly originated nonprime mortgages. UFA’s analysis is based on a ‘constant-quality’ loan, that is, a loan with the same borrower, loan and collateral characteristics. The index reflects only the changes in current and expected future economic conditions, which are less favorable currently than in prior years.

UFA’s pioneering mortgage analysis has successfully predicted problems in the mortgage market well in advance including the increased defaults in Southern California in the mid-90s and the recent national mortgage crisis. Its predictions are based on an extensive analysis of local economic conditions in each state and the relationship of those conditions to loan performance. The historical record of millions of mortgage loans is studied each quarter to assess the vulnerability of each state to loan losses and prepayments. The detailed analysis of each state – including best and worst places to lend – is available in the UFA Mortgage Report, published on a quarterly basis.